The plunging canyons and red rock cliffs of Utah attract outdoor enthusiasts the world over, and the state's most famous national parks have collectively been dubbed The Mighty 5®. Thanks to their stunning geology and unique outdoor adventures, all five come highly recommended by numerous sources, including National Geographic, the Guardian and Lonely Planet.

Zion is the first name in Utah National Parks (literally - it was the first national park in Utah). Known for its steep red cliffs and unique geological features such as the Subway, this park draws three million visitors annually. While a private website dedicated to the park claims that seasoned travelers find Zion to be particularly "user-friendly," the National Parks Service claims that planning a trip to and visiting the park can be difficult. Be sure to research what's involved in visiting Zion before planning a trip.

Zion can be reached conveniently from Las Vegas (2.5 hours) and Salt Lake City (4 hours), and its frequent, free and easy-to-use shuttle system transport guests from the nearby town of Springdale and throughout the park itself. Zion Lodge offers motel rooms and cabins inside the park and is home to the Red Rock Grill Dining Room. Those intending to camp can choose from Lava Point, Watchmen Campground or South Campground. 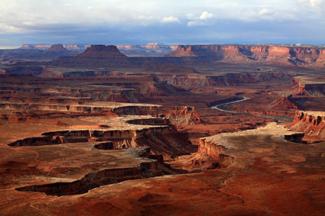 Separated into four sections by the Colorado River, the entire expanse of Canyonlands has been carved out of Utah's renowned red rock. The four sections of the park - the Island in the Sky, the Maze, the Needles and the Rivers - can be hard to travel between because there are no roads that bypass the Green or Colorado Rivers to connect them. However, each district has a unique character and geography that contributes to the park's reputation as a must-visit Utah park.

Commercial flights operate to Grand Junction, Colorado and Salt Lake City Utah (two and four hours away from the Island of the Sky park entrance), but no public transportation runs to the park directly so visitors will require a car. Each section of the Canyonlands must be approached from a different direction, so allow for several hours of travel time. Once inside the park, visitors can camp at two campgrounds, one in the Needles and one in the Island of the Sky, but must venture outside the park for alternate accommodations and restaurants. 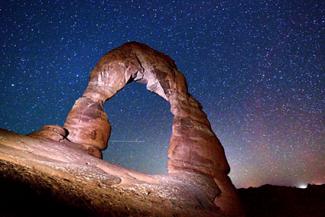 This park has the largest concentration of stone arches in the world (numbering over 2,000), and the famous Delicate Arch is printed on Utah's license plate. The park is located in southeast Utah, five miles north of Moab. Public transportation will take visitors as far as Green River or Grand Junction, but it's recommended that visitors rent their own car and take the scenic drive north from Moab and through the park's 18-mile stretch of meandering canyons and breathtaking rock formations.

There is one campsite located inside the park (closed for the majority of the 2017 season due to road construction), but backcountry camping is also possible as long a groups secure the proper permits and camp at least one mile from the road. Additional accommodations are available at several campsites, hotels and guesthouses outside of the park in Moab. 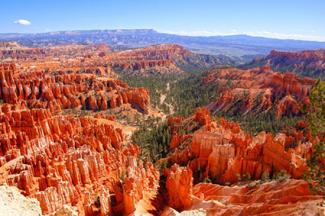 Just as Arches is known for its concentration of arches, Bryce Canyon is famous for its collection of hoodoos - the largest in the world. These unique pillars of rock along with the park's natural amphitheaters of stone draw 1.5 million people every year, eager to take in the park's unique scenery and explore via foot, horseback, ATV or sleigh rides (in the winter).

The major airport hubs of Las Vegas and Salt Lake City both sit about 270 miles from the park. There is no public transportation to the park so visitors are encouraged to rent a car or charter a bus for larger trips. Free shuttles operate within the park, taking visitors to the most popular points of interest. North and Sunset campgrounds service those wishing to camp inside the park, and both are located close to the Visitor's Centre and the Bryce Amphitheater. Plenty of additional lodging, including campgrounds, hotels, B&Bs and RV parks, is available in the surrounding towns. 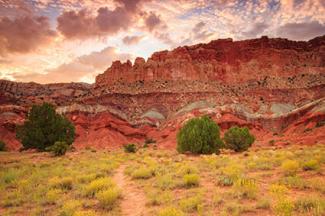 Utah parks seem to play in superlatives, and Capitol Reef is no exception. The park, though the most remote and least visited of the Mighty 5, is home to the Waterpocket Fold, an S-shaped rock formation that winds through the park's 100 miles and is the world's longest monocline.

The park must be reached by car (or another form of private transportation) and it can be accessed from the east/west via Interstate 70 or the north/south via Interstate 15. There are no restaurants or lodges inside the park, though the charming Gifford House sells baked goods and basic refreshments in high season (March to October). Inside the park there is one developed campground with 71 sites as well as two primitive campgrounds. There are also campgrounds, cabins and other accommodations available in Reef County.

The Mighty 5 of Utah all have something that no other park does, be it the most hoodoos in the world, the longest exposed monocline or a Grand Staircase that reveals billions of years of rock layers. Each park has unique geology that is well worth the visit and makes Utah one of the most interesting places in North America for nature lovers.