K-Light solar lanterns may be an ideal piece of equipment for those who spend lots of time in the outdoors. It is also great item to keep in your camper or your home in case of a power outage. Learn more about this useful and versatile product in this exclusive interview.

LoveToKnow (LTK): Who is PiSAT Solar?

Dale Williams (DW): PiSAT Solar is a for-profit organization that manufactures the K-Light Solar Lantern, a solar-powered lantern/flashlight developed in Michigan to replace kerosene lighting in areas that lack electricity. Approximately 1.6 billion people worldwide lack access to electricity. PiSAT Solar is committed to bringing a safe, clean source of renewable energy to populations who otherwise would have to live with dangerous and inefficient fuel-based lighting sources.

LTK: What was the inspiration behind the K Light and how long did it take to develop?

DW: The inspiration behind the K-Light arose from PiSAT members' work in Africa. While working with the non-profit Koinonia Foundation to install solar power systems on schools in Rwanda, PiSAT members noticed that, when the school day ended, students would have to go home and study by kerosene wick lanterns. These kinds of fuel-based lighting sources cause fires and health hazards and are also bad for the environment.

PiSAT president, William Greenhoe, had previously developed a solar lantern and wanted to create a new product that would meet the specifications and price point for markets in Africa. The light was named the "Koinonia Light" or "K-Light." In 2006, PiSAT began developing the K-Light, and the first version went into production in 2007. In 2009, K-Lights began to be sold in Africa. Shortly before that, PiSAT introduced the light to the domestic market for camping, recreational, and emergency purposes.

Benefits of the K-Light

LTK: How easy are K-Lights to transport? How much to they weigh?

DW: The K-Light was made to be a portable power source, so K-Lights are very easy to transport. Each light is a little bigger than a 20 oz bottle of soda and weighs 22 oz. with the solar panel.

LTK: How durable is the K-Light? Is it safe to toss in a backpack or keep in a camper?

DW: The K-Light was designed for daily use in Africa. Therefore, it is very durable and it is safe to carry in a backpack or keep in a camper. The lantern itself is water-resistant, and the solar panel is waterproof.

LTK: What are the benefits of the K-Light over other lanterns?

DW: Some of the major benefits of the K-Light over other lanterns are:

LTK: How long does it take to charge and how long will it last per change?

LTK: Can a K-Light use other power sources or is it strictly solar powered?

LTK: What should campers and outdoors people know about K-Light?

DW: Since the K-Light was made for daily use in rugged and rural areas, the K-Light is a great piece of gear for your outdoor activities. You can also charge your phone by the K-Light, so you can stay connected while you're out trekking.

LTK: Where can it be purchased?

DW: The K-Light can be purchase from our website PisatSolar.com and at several specialty outdoor retailers in Michigan. See our website for a full list of retailers. 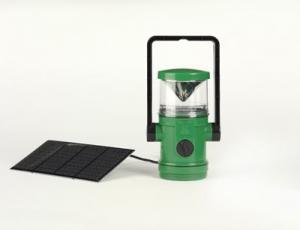 DW: Here are the full specifications:

The K-Light may just be the ideal light for camping or home use.

Special Thanks to Dale Williams

LovetoKnow would like to thank Dale Williams for taking the time for this interview.