No trip into the wilderness is complete without telling a few spooky stories in front of the campfire. The stories don't have to be anything fancy -- the crackling fire, the dancing shadows and the natural sounds of the forest are enough to create a perfect atmosphere and send chills up everyone's spine.

The stories below are ideal short tales for campfire gatherings. For a printable PDF version of any of the stories, click the corresponding image. Access the "File" menu for both "Print" and "Save" commands. If you need help downloading the printable versions, check out these helpful tips.

Mouse or Maniac by Matt Danielson

There once was a deserted house at the end of the street, just by the edge of the forest. My brother and I used to go there to hang out and play, despite -- or perhaps because of -- mom's wishes for us to stay away.

One warm summer evening we grabbed flashlights and headed over there. It was really creepy, but we egged each other on and crawled in through the kitchen window, as usual. We had brought a deck of cards and were playing a bit of poker at the kitchen table when we suddenly heard a scraping sound upstairs.

"Probably just a mouse," my brother said. The house had been empty for years so it seemed quite possible.

A minute later we heard another scraping sound, only this time it was coming from the stairs on the other side of the house. My brother and I looked at each other for a few seconds, then both nervously giggled because we didn't want to let on that we were getting scared. We dealt another hand of cards and kept playing.

Then there was a clank of metal against metal, just outside the kitchen door. We could see nothing in the darkness out in the hallway, but we knew something just made contact with the old metal fireplace guard out there.

My brother and I flew to our feet and ran to the window. I got there first and jumped out. He followed a split second later, jumping out with both feet first so fast there was a whooshing sound. We ran like our pants were on fire all the way home, where mom was standing on the porch wringing her hands.

"Thank goodness you're home," she said. "There's a maniac on the loose. He escaped earlier today, and he's got a big butcher knife and is looking for young boys to kill. Well, come inside, it's time for bed."

My brother and I looked at each other, still panting from the mad rush, and then we followed mom inside.

"Hey, what happened to your shirt?" she asked as we made our way to the bedroom. "Did you get it snagged on something again? Wow, this is quite a rip. What could have caused this?"

She pointed at a long gash across the back of my brother's shirt, from the shoulder almost all the way down to the waist.

What caused the whooshing sound when he jumped out the window? All we know is that the maniac was caught a week later after having sliced open five young boys in town, all in deserted houses just like the ones we'd been in.

Murder on the Appalachian Trail by Ryan Dube 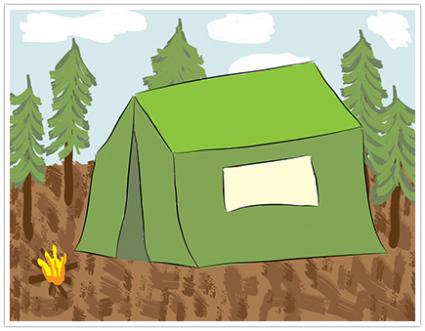 The day that Claudia Brenner and Rebecca Wight were shot was a sunny spring day on the Appalachian Trail. The two women were lovers, and spending some time together after a long hiatus apart. After hiking south for many hours along the Pennsylvania section of the Appalachian Trail (A.T.), the two women pitched a tent at the Birch Run Shelter and slept through the night uneventfully.

The next morning, Rebecca walked over to a lean-to to check for their hikers' logbook. She did so nude because it was a very warm day and nudity is a common luxury among many hikers in a secluded campground. Unfortunately, she encountered a man sitting there. After an uncomfortable exchange, Rebecca returned to the tent and both women quickly got dressed and left the campsite in search of a more private place where the two could enjoy nature in peace.

At one point, as they stopped to check their map for directions, the rough-looking man came up behind them and asked them if they were "lost already." This time the two women noticed that the man was carrying a rifle. Unnerved, Rebecca and Claudia headed up a side trail to avoid the strange man. As the day progressed they soon forgot about the spooky encounter. Eventually, they came to a beautiful, secluded campsite beside a small stream. As they relaxed by the stream, the mood turned romantic. Claudia suggested that they pitch a tent for the evening, and seconds later the first gunshot rang out.

The first shot hit Claudia in the arm. Rebecca told Claudia to get down low, but the next four shots all struck Claudia, once even in the head. Realizing they had to take cover, Claudia first ran to the large hemlock in the middle of the campsite. When Rebecca ran for the tree as well, she was hit twice, in the head and the back. As both women escaped the campsite in terror, Rebecca couldn't continue on, so Claudia had to leave her. After a long and terrifying hike out of the woods, Claudia hailed a car. Unfortunately, when the rescuers found Rebecca later, she had already died from her injuries.

Death In The Grand Canyon by Ryan Dube 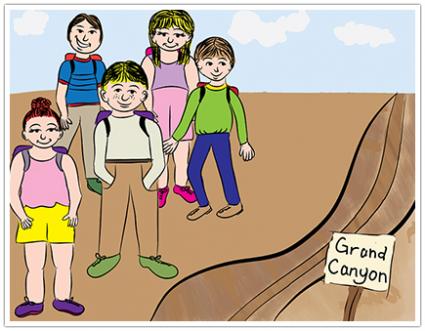 In the summer of 1996, a group of college students from Phoenix, Arizona decided to take a road trip to the Grand Canyon. The Grand Canyon is an amazing natural wonder, but in the summer it is a giant bowl that collects solar radiation from the sun, catapulting temperatures to well over 105 degrees Fahrenheit. Every summer, dozens of tourists fall victim to dehydration, heat exhaustion and sunstroke. Unfortunately, this particular group of college students knew very little about the Canyon. In total, they brought along only four bottles of water each, and were wearing nothing more than shorts and T-shirts.

The group arrived at the South Rim at around 8:30 a.m. on a Saturday morning. The temperature was a mild 80 degrees Fahrenheit, so they felt comfortable and positive about the hike. The group consisted of three boys, Tom, Henry and John. There were also two girls, Sandra and Elizabeth. By 8:45 a.m., the group was standing at the edge of the canyon, soaking in the hypnotic view of the far-reaching vista. By 9 a.m., they were headed down the trail.

The hike down was uneventful. However, once the students made it to the bottom of the canyon, temperatures had already reached 95 degrees. After exploring the inner canyon briefly, all five students were perspiring heavily, and more than half of their drinking water was already gone. By the time they decided to leave, temperatures were already topping almost 115 degrees. No longer able to handle the heat, the group decided to hike out as soon as possible and get back to the car. However, about halfway up toward the South Rim, it became very clear that the hike out was going to be impossible. Due to dizziness from heat exhaustion, Sandra stepped awkwardly on a rock and tore her ankle so badly that she couldn't walk on it. Tom and Henry tried to help her along, but all three were becoming too exhausted to even stand.

Horror struck the group when Tom, attempting to peer out over a ledge to see how far they'd climbed, became dizzy, slipped and tumbled over the edge to his death on the rocks far below. Once the reality of this accident sunk in, panic ensued. John and Elizabeth decided they wouldn't wait on the trail to die, so they continued on up the trail, only to pass out from heat stroke less than a quarter of a mile later. Henry, who had stayed behind with his injured girlfriend, eventually succumbed to the heat, as did she. Once the Rangers discovered the members of the group hours later, they found four dead from the elements and one killed by the impact of the tremendous fall.

If you're planning a camping trip, three stories might not be enough. Here are some good resources to get you started in your quest for tales appropriate for evenings spent gathered around the campfire.

Here are a few tips about your role as the storyteller. Remember to use good judgment, especially if you're telling your stories to a mixed audience. Sure, the older kids may yawn, but always let the youngest in the company set the bar for how ghoulish the tales will be. Camping is supposed to be about good, wholesome fun for the whole family, and terrifying little Billy in order to entertain Judy isn't the way to go. Having said that, no camping trip is complete without a few good stories so find the right balance, and you're set for a great outing. Good luck!