Airstream travel trailers certainly have an appeal all their own! Whether you currently own an Airstream, are thinking about buying one, or just want to learn more about these unique RVs, you'll likely find this exclusive expert interview with Gregory Gibson, owner of Vintage Airstream, LLC, to be quite interesting.

Gregory Gibson (GG): I believe that there are various factors in play, including uniqueness and design simplicity. Anything taken to its highest level can be considered art, and the Museum of Modern Art (MOMA) has designated the Airstream as a work of art. Perceptive artists learn that great art is a process of elimination. When you look at an Airstream, there isn't anything there that shouldn't be there. It is completely harmonious. The shape is organic and one of the most pleasing and perfect shapes that exists in nature for the eye.

Airstream's nostaligic significance, in much the same vein as classic cars, trucks and other vehicles that are sought by collectors, is another important factor.

Also, what I refer to as the "mobile pod" factor is also a consideration. This is the idea that the Airstream is like a little home or apartment pod on wheels that you can take anywhere.

LTK: What do people need to know about Airstreams before purchasing one?

GG: I would suggest researching and studying various online resources and having conversations with current Airstream owners. Visit an Airstream dealer and look at the product. Visit the factory in Jackson Center, OH for a guided tour of the production facility.

LTK: What factors should influence a person's decision to purchase a new unit versus a vintage trailer?

GG: Personal preference and budget, or a combination of both, are probably the biggest factors. Some people prefer to purchase everything new. If you have the means to do that, great. Some buyers may not be in a position to purchase new, or are thrift-minded. It's no secret that Airstream is a premium product that is unique in the marketplace and the price reflects that.

The good news is that a vintage unit is not necessarily a lesser trailer than a new one. In fact, it can be preferable regardless of economic factors. I can just about guarantee that when a high quality restoration of an old 13 panel Airstream (pre 1958) pulls into a park full of all new Airstreams, it will have everyone's undivided attention. Even a high quality restoration of an older unit can be purchased for considerably less than a brand new one.

LTK: What is the best way to shop for a secondhand Airstream?

GG: Numerous marketplaces are well worth a look. Some of the most popular are eBay, Craigslist, and the various online classified sites. I urge anyone that utilizes these sources to exercise caution and common sense. I strongly advise buyers to view and inspect a trailer prior to any money exchange or commitments.

Make sure you can reach the seller and speak to them by phone. eBay experiences fraudulent account takeovers in which scammers will list Airstreams for too-good-to-be-true prices. Free classifieds & Craigslist have become quite popular, but anyone can use a fictitious name and post photos they've taken off the Internet to scam a buyer and remain anonymous.

We've developed our own Vintage Airstream Classified ads and deliberated at length as to how to address this problem. The idea of offering free classifieds was really attractive. However, ultimately, customer safety is more important to us. The solution we arrived at was to offer far more features than anyone else and set a nominal price that is just enough to cover overhead. Scammers won't pull out a credit card because they risk being caught. It's been a huge success. We get tons of buyers and sellers and daily thank-you emails with compliments. I have received emails from sellers stating that their Airstreams sold on the very first call. 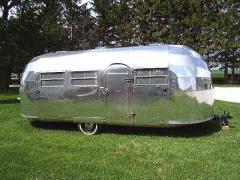 LTK: How can a buyer tell if a previously owned Airstream is in good condition?

GG: You can often glean a good bit of information from the owners. If they have owned the Airstream for a considerable time, kept it up with regular maintenance and service and especially if they've kept it covered in a garage or barn, then you're likely looking at a nice trailer. Check everything anyway, though.

I suggest using an inspection checklist. Be sure to check all the basics in person. Look for solid floors and make sure the major systems (LP, water and electrical systems) are all operating properly. Have the seller test and demonstrate all the major appliances including AC, stove, refrigerator, water heater, and furnace.

Other things to check include the water pump, inverter/converter, battery, tires, brakes and exterior lights. Check underneath for a look at the belly skin. It isn't going to be beautiful but it should be intact.

One thing we hear frequently concerns oxidation, more commonly known as rust. This relates primarily to the frame and running gear. Surface rust occurs naturally on unprotected steel/iron caused by exposure to moisture and air. It can and does exist even on brand new vehicles.

Check the trailer's running gear, hitch area and rear bumper area, especially where they attach to the main frame structure. Surface rust should not be a cause for great alarm. What you want to watch out for are areas where corrosion has eaten through creating holes, extremely deep pitting or severe flaking. Severe aggressive oxidation occurs frequently with exposure to salt water environments such as in coastal areas.

LTK: What factors influence the value of vintage Airstreams?

GG: Size, age and condition are overriding factors. Generally, smaller as well as older units are most sought after. The exceptions are special one-off trailers and custom units from the factory which is one of those fun, quirky things Airstream was famous for in its early years.

As far as condition goes, obviously any damage issues a trailer has detracts from its value as does degree of retained originality. There really is no definitive schedule or guidebook to go by.

When our shop purchases an Airstream for a project we have to factor in numerous variables and there is a certain small part of that equation that simply amounts to how desirable the unit is to me personally. I have to be careful, though. We have far too many of them sitting around already. You just can't love them all!

LTK: Is there a way for Airstream owners to network with each other online?

GG: Unlike many other topic areas of interest, the Airstream world doesn't have an abundance of options. To address the noticeable lack of available options, we've launched the Vintage Airstream Forums. One of our founding principles is that above all else our community will remain friendly and inviting to all members and newcomers. We encourage people to sign up, join in and have fun, because ultimately that's what it's all about anyway.

LTK: What makes your company unique?

GG: Any small business is innately infused with and takes on the personality of the owner(s) to a certain degree. I don't think we're any different. I was educated and trained in fine arts with an MFA. As a painter I've exhibited nationally and have been in some fairly important shows. I spent a number of years doing high-end casework for yachts and libraries. So I think I have a thorough understanding of aesthetics and design.

After having been involved with Airstreams for over a decade, I decided to take on a partner who is basically in charge of all things web based. He's a brilliant programmer and probably just as eccentric as I am. However, we mesh well, I think because we both hold a basic Libertarian viewpoint.

The last couple of years we've branched into developing more online research and informational resources for Airstream aficionados. We've been working on some large components including a complete timeline/photo identification resource and applications for mobile devices that are soon to come.

There are typically six of us, including a factory trained master mechanic, assistants and office personnel. There is no typical employer/employee structure aside from occasional guidance from me. I'm pretty lucky to have crew members who all know what to do and are motivated. Our atmosphere is very relaxed and we have fun. I learned long ago that when you treat people well and reward them for what they do, even hard work becomes a joy. We're all strange, but it works well for us.

LoveToKnow Camping would like to thank Gregory Gibson for taking the time to share his insight about Airstream travel trailers with readers and wishes him and his team continued success.